From the center of Custonaci, known as the “city of marble”, you can easily reach the “Cerriolo” suburban park, from where a beautiful view of the gulf of Bonagia, with Mount Erice on the western side and the imposing mount Cofano to the north, can be admired. Apart from the beauty of its landscape, the park is also very interesting for its geomorfology: inside the park, along the old mule track rich in shrubs and dwarf palms typical of the Mediterranean maquis, it is possible to distinguish karst phenomena and, following the signs, to visit the caves, really interesting both speleologically and archeologically, such as the one called “Cafuni” with stalagmites and stalactites.

After about 1 kilometer, you reach Scurati where you can visit the Grotta Mangiapane (Mangiapane cave), one of the most important caves in the territory of Trapani.
About 70 meters high, 13 meters wide and 50 meters deep, it was inhabited by humans since the Upper Paleolithic.
Numerous prehistoric findings have been found inside it, including animal bones and teeth, worked flint, obsidian and graffiti now kept in the Pepoli Museum in Trapani and the Ethno-Anthropological Museum in Paris. It was inhabited until the 1950s and belonged to the Mangiapane family, hence the name. During the Christmas period the event called “Presepe vivente di Custonaci Living Crib of Custonaci)” takes place inside. It involves more than 160 people from all over Sicily, such as craftsmen, artists, peasants, shepherds and many extras. Moreover, some episodes of the successful Italian television series “Il Commissario Montalbano” have been shot inside.

Thence due north towards the Riserva Naturale Orientata di Monte Cofano (Mount Cofano Nature Reserve): in addition to a breathtaking view of the coast, it contains within it a great wealth of flora and fauna: the dwarf palm, the euphorbia and a large diversity of herbaceous species (such as the drimia maritima, also known as squill or sea onion, sea calendula, cyclamen and iris) colour, even in winter, this area. The animal housed here are predominantly terricolous species, such as porcupines, hedgehohs and some species of reptiles. It is also characterised by the presence of wild birds such as barn owls and owls. The route ends at Cala Buguto, a stretch of coastline lapped by crystal-clear waters in the beautiful setting of the Bay of Cornino that, in the last week of August, hosts the “sbarco della Madonna (landing of our Lady)“: an evocative procession by sea, followed by a multitude of boats with faithfuls, to pay tribute to the patron saint of Custonaci (and other surrounding municipalities).

Scurati and the Mangiapane Grotto

In the locality of Scurati, there is a small village dominated by the cliffs of Mount Cofano and surrounded by natural caves, some of which are used by shepherds and local farmers.
The largest, the Mangiapane grotto, has a tiny hamlet built inside it along a corridor paved with stones and pebbles. It is named after the family that lived there, in tiny homes from 1819 until 1950. Approximately 60 metres high and 70 metres deep, it has been used by man since the Upper Paleolithic period, as shown by the artifacts found inside it. In the early 19th century the Mangiapane family built five small two-storey houses, a warehouse and two barns on the site. Other rooms and a large oven were built by closing the bottom of the cave. Outside cottages were built, and a smaller cave was used as a sheep pen. 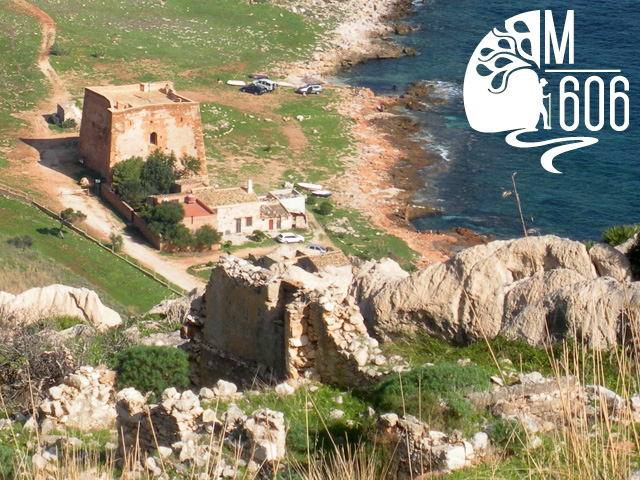 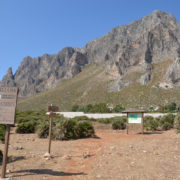 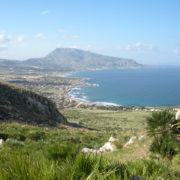 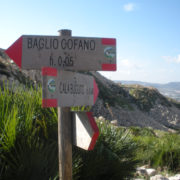 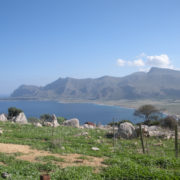 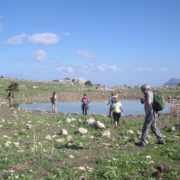 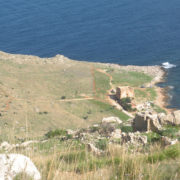 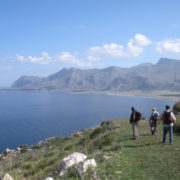 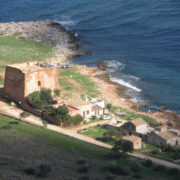 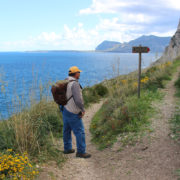 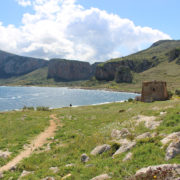