The trail starts from the Riserva Naturale Orientata di Monte Cofano (Mount Cofano Nature Reserve), more precisely from the Torre della Tonnara di Cofano (the tower of the tonnara of Cofano), also known as Torre Tono, a star shaped Spanish fortification. Thence in a north-westerly direction for about 1,4 kilometers to San Vito Lo Capo, the fishing village famous for its white sandy beach and its “Caribbean” waters. This stretch of coast offers enchanted places and a thriving nature in one of the most enchanting cliffs of Sicily. A lush Mediterranean vegetation (mainly scrubland) meets the harsh, barren and wild shapes typical of the dolomitic rocks, whereas deep grottoes open along their sides (where traces of the first human settlements in Sicily, dating back to the Palaeolithic period, have been found). The landscape is simply amazing: the steep reddish cliffs are mirrored in crystal-clear waters which give a glimpse of the underlying seabeds.

In the same seabeds, next to the Scoglio (rock) Scialandro, finds of amphors and pottery have been found, as well as finds of a ship nicknamed “the wreck of Scialandro”. It is advisable to use suitable shoes. Here, the scuba diving lovers can easily encounter moray eels, groupers and lobsters, as well as they can see coloured cliffs, covered with sponges and parazoantus (the so called “yellow cluster anemone”).

After about 7,6 kilometers, the trail heads along sandy beaches to Torre Isulidda, a watch tower dating back to the 17th century, perched on a rocky spur dropping sheer into the sea and located in a strategic position in the gulf of Makari, where a breathtaking view can be admired. This is also a very coveted destination for climbing lovers, with many climbing routes along the cliffs overlooking the sea. In October an international event is held (SanVito Climbing Festival).

Then the path follows an old mule track and, after about 1 kilometer, it arrives at San Vito Lo Capo, where you can visit the village and taste an exquisite couscous with fish, or a delicious “caldo-freddo (hot-cold)”, a bowl of ice-cream with the addition of soft cookies (or sponge cake) moistened with an appropriate liqueur (usually with Rum), cream and topped with a drizzle of hot chocolate. In September the Cous Cous Fest, not only a gastronomic event but also an international festival of cultural integration, attracts visitors from all over the world.

Situated in a natural setting of extraordinary beauty opposite the rock of the ‘Scialandro’ and close to ‘Cape of the Cross’, the former Cofano ‘tonnara’ already existed in 1404, when is was owned by the Bosco family. It was inhabited until the mid-twentieth century.
As the main source of economic livelihood for the fishermen of the area, it was one of the most active and productive tuna processing plants for the economy of Trapani.
Adjacent to the ‘tonnara’ is the tower dating back to the 16th century, part of the Spanish defense system along the coast of Sicily. Built between 1556 and 1560, it has a square four-pointed star shape and due to its concave walls represents a unique example of its kind in Sicily.
It was in visual contact to the north-east with the ‘Isulidda’ tower just across the bay, to the south-east with the ‘Muzza’ tower; no communication was possible however with the nearby tower of St. John because it was obstructed by Mount Cofano.
The tower was purchased by the Regional domain in May 2006. Restored with EU funds, it was reopened to the public in April 2010.

The Isulidda watchtower is one of those included in the circuit designed in 1583 by the Florentine architect Camillo Camilliani, who was given the task of creating a defense system against pirates who infested the Mediterranean causing massacres, looting and destruction.
Like all other towers by Camilliani, it has a square  base and a strong embankment to house the cistern and storage for ammunition. A square room divided into two parts for the ‘torrari‘ (guardians) is located on the first floor; on top is the terrace where  artillery was placed and where the signals (fani) with smoke and fire were sent up.

Of Arab origin, Trapani’s version (locally called ‘cùscusu’) is strictly made with fish. Its preparation is a ritual that has been handed down from mother to daughter and requires the use of typical pots and bowls. Made with semolina and water mixed in a circular motion (the famous incocciata), the couscous granules are then steamed and flavoured with local fish stock. 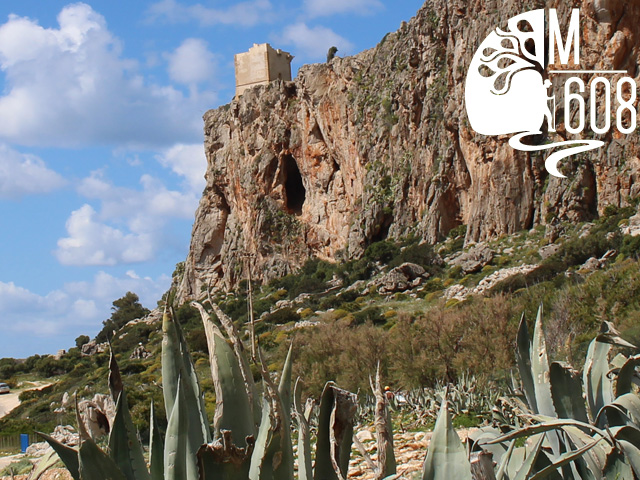 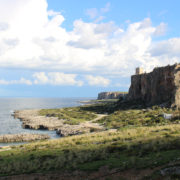 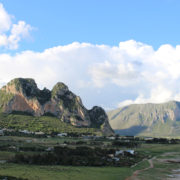 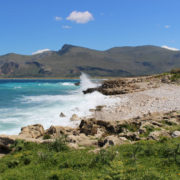 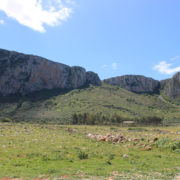 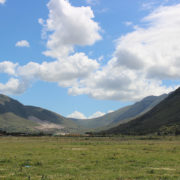 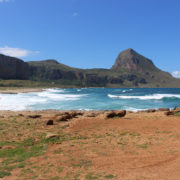 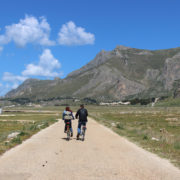