What immediately strikes those who look at Mount Cofano is its lonely majesty. It almost gives the impression of wanting to detach from the coast and dive into the blue sea.

The route, loop-shaped, develops within the Riserva Naturale Orientata Monte Cofano (Mount Cofano Nature Reserve). Established in 1997 and managed by the Regional Department of Public Forests, it covers an area of approximately 537 hectares: it is a promontory enclosed between the Gulf of Bonagia and the Gulf of Cofano and it originated from the lifting of marine calcareous deposits.

The trail starts from Cala Buguto, in the Bay of Cornino (in the municipality of Custonaci) and passes through an unspoiled coastline with no houses, characterised by the typical Mediterranean maquis (dwarf palms, cistus, ampelodesma, wild orchids, etcetera), rather sparse but rich in endemic species (Sicilian heather, helicrysum cophanense, cavolo di Trapani-cabbage from Trapani, etcetera) which colour the mountain in all seasons. From here beautiful views can be admired: the cliffs rise steeply from the sea whose waves crash against the shoreline, thus creating charming water games.

After walking about 1 kilometer hikers get to Torre di San Giovanni (Tower of St. John, 16th century). Recently restored, it was part of the fortification system built by the Bourbons in order to protect the Sicilian coasts: it was perfectly connected to the “tonnare (tuna-fishing factories)” of Bonagia and San Cusumano (Erice) and, in case of sightings of enemies, the danger was signalled by waving flags and by gunshots. A stone staircase leads to the terrace, once used as a sighting point and now used as a panoramic place where a beautiful view can be enjoyed. A little further ahead is the Grotta del Crocefisso (Grotto of the Crucified), a cave approximately 10 meters deep, where some archaeological finds of prehistoric times have been found: in all likelihood it offered refuge to the inhabitants of the area in the Neolithic era. The remains of a mollusc, nowadays extinct, are still visible on the ground: it was part of the diet of our ancestors.

The nearby Cappella del Crocefisso (Chapel of the Crucified Christ), still today a pilgrimage destination, together with the Edicola di San Nicola di Bari (chapel of St. Nicholas from Bari), dating back to the 18th century, are expressions of a popular culture and witnesses of faith, which tell us how deep-rooted the religiousness is amongst the inhabitants of this area.

The itinerary continues towards a basin, which is not clearly visible from the sea, where is located an archaelogical site dating back to the 5th-4th century b.C.. Recent studies have suggested that they are the remains of Eraclea, an ancient Greek settlement. This area has a gateway bordered by a ring of fortified walls. In the upper part of the plateau there is a huge tank used not only to collect rainwater but also as defensive tool. A staircase is carved into the rock: an additional protection of the settlement.

A little further one is the Torre della Tonnara (tower of the tuna-fishing factory) di Cofano, dating back to the 16th century, also named Torre Tono, the only one in Sicily with a square plan forming a four-pointed star. Its walls are made of irregular stones with a single curvature, in order to better withstand cannon shots. The tower has been recently restored and it can be visited. Today it houses an interesting photographic exhibition dedicated to the defensive system of towers (the towers were part of the fortification system built in order to protect the Sicilian coasts from the Saracens).

The route continues uphill in a southerly direction, towards a small depression which periodically gets full of water: in the past it was used as water supply for the families who lived in this area. This seasonal pond is also known as Gorgo Cofano: it is best known because the duckweed and, above all, the ranunculus baudotii (a pond-water crowfoot with white and yellow flowers) grow: small crustaceans can also be found.
Cala Buguto (the starting point) is not far from here.

Situated in a natural setting of extraordinary beauty opposite the rock of the ‘Scialandro’ and close to ‘Cape of the Cross’, the former Cofano ‘tonnara’ already existed in 1404, when is was owned by the Bosco family. It was inhabited until the mid-twentieth century.
As the main source of economic livelihood for the fishermen of the area, it was one of the most active and productive tuna processing plants for the economy of Trapani.
Adjacent to the ‘tonnara’ is the tower dating back to the 16th century, part of the Spanish defense system along the coast of Sicily. Built between 1556 and 1560, it has a square four-pointed star shape and due to its concave walls represents a unique example of its kind in Sicily.
It was in visual contact to the north-east with the ‘Isulidda’ tower just across the bay, to the south-east with the ‘Muzza’ tower; no communication was possible however with the nearby tower of St. John because it was obstructed by Mount Cofano.
The tower was purchased by the Regional domain in May 2006. Restored with EU funds, it was reopened to the public in April 2010.

Designed by Camillo Camiliani and built in 1595, St. John’s Tower is situated in a strategic location on the slopes of Mount Cofano. It was part of the system of watchtowers positioned to defend the coast of Sicily. In the 16th century, on behalf of the Spanish government architects Spannocchi and Camilliani planned a sophisticated circuit of watchtowers along the Sicilian coast as a defense system against pirate attacks. In case of imminent danger, the ‘torrari’ ie tower keepers had to sound the ‘brogna’ (shell) and send smoke and fire signals (‘fani’) from the terrace to alert the other towers and the inhabitants of the hinterland. St. John’s tower was in communication with the towers of the Monte San Giuliano ‘tonnara’ and the one in Bonagia.
Like all ‘Camilliani’ towers, it is square with a strong embankment at the base for containing the cistern and as storage for ammunition. The covering is the form of a barrel vault made with small tuff bricks. By accessing a brick staircase you can reach the terrace and enjoy a breathtaking view. 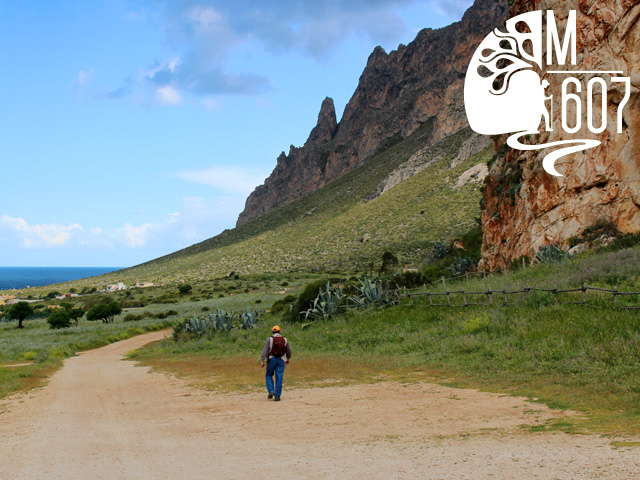 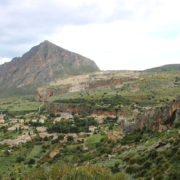 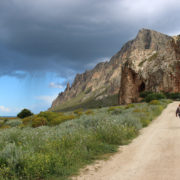