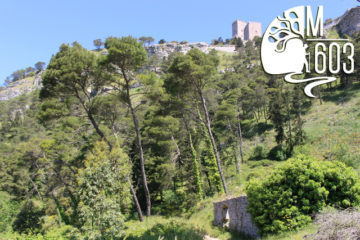 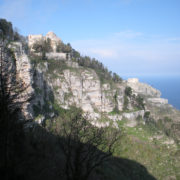 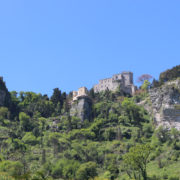 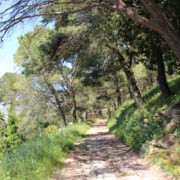 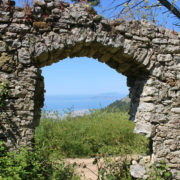 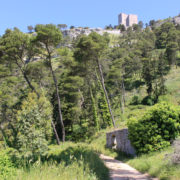 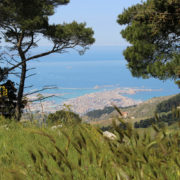 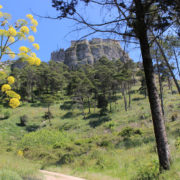 We are on the top of Mount Erice, in the square that takes its name from the nearby Chiesa di San Giovanni (church of St. John), one of the oldest churches of Erice.

This church, from where you can enjoy a breathtaking view, is recognizable by its white dome that stands out at the eastern tip of Erice. Its original structure it is thought to date back to the 12th century; the church has been restored and extended several times, while featuring its suggestive entrance portal in Late-Gothic style; now it is a modern auditorium which preserves some masterpieces of Renaissance art. From the square, a walkway leads to the Torretta Pepoli (Pepoli Turret), dating back to the 19th century and built by count Agostino Pepoli (not accidentally named after him). Built on a cliff in a charming panoramic position (stretching from the gulf of Bonagia to Trapani and its saltpans), this characteristic Art Nouveau building was intended for meditation and study. Today the Turret, after an accurate restoration, has regained its original beauty and can be visited.

The Castello Normanno (Norman Castle) rises majestically on an imposing rocky outcrop; below a pine forest (created by count Pepoli who wanted to breathe ‘balmy air’) surrounds the area. The Castle was built over the remains of the ancient temple of Venere (Venus), a sacred building erected by the Sicanian-Elymians (9th-8th centuries b.C.) for the worship of the goddess of fertility, as well as a place of devotion for the Mediterranean peoples.

Placed as a defence to the valley below, the castle was built in the 12th century AD by the Normans. The doorway is characterised by an ogival arch and topped by a commemorative plaque depicting the eagle of the Hapsburg monarchy. Besides its defensive function it also housed the prisons which are still visible. Today it is used as a place for cultural exchange: during summer nights it’s easy to be enchanted by listening to music, poems and old songs, enveloped in a seductive atmosphere.

Then the path continues in a south-westerly direction to Porta (Gate) Trapani, one of the three gates to Erice through the Cyclopean walls.

The existence of the church is traced back by local historians to the 14th century (1339), but probably the first building dates back to the 12th century; it underwent some restorations in the 15th century, between 1430 and 1436, renovated and expanded in the 17th century (1631) and decorated with stuccoes on the altars in the 18th century.
In the scenic background of mount Cofano, between sky and sea, the high dome rises up, located at the intersection of the single nave of the church with the transept: the oldest entrance (eastwards) is marked by an ogival portal (14th century), with multiple archivolts, decorated with zig-zag elements and fronted by an original staircase.
The church, today used as an auditorium, keeps inside some valuable works of Renaissance sculpture attributable to Gabriele di Battista from Lombardy, Antonino Gagini and his workshop. The most famous of the Gaginis, Antonello, was the sculptor of the elegant statue of San Giovanni Evangelista (St. John the Evangelist, 1531), placed at the right transept, in the base of which are depicted, in relief, the martyrdom of the Saint and a person praying, perhaps the client.
There are also displayed the remains of Medieval frescoes coming from the rocky church of Santa Maria Maddalena (St. Mary Magdelene); a further highlight is the decoration with stuccoes of the altars, made in the 18th century, in particular the altar of San Vito. 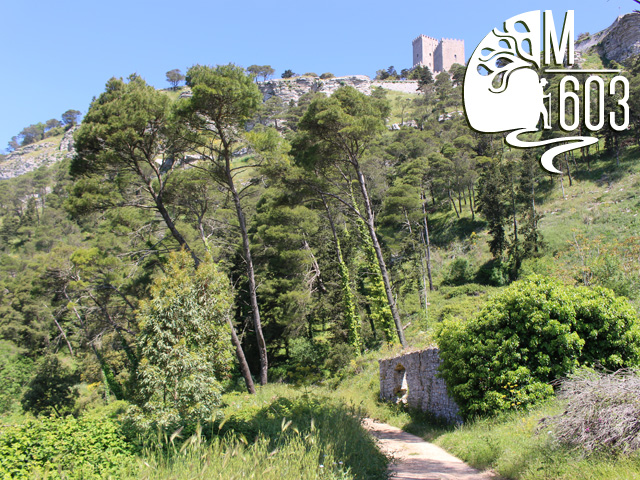